Though I rarely travel for work, I had business to attend to in New York two weekends ago.  I'm by no means an expert when it comes to the Big Apple, though I can at least attest I'm not overwhelmed when traveling there.  It just so happens that my company was able to provide a room at the Westin Times Square, a property I've stayed at before during Christmas time.  I redeemed points for a room on that stay that included free breakfast at the now-closed Atrium Club.  It was a memorable trip, but this visit would be solid as well.


I really enjoy the location of the Westin.  Located at the corner of 43rd and 8th, the property is extremely close to the Times Square hornet's nest, but also far enough removed that the noise and crowds aren't overwhelming.  Close to the subway and most Broadway theaters, I really can't say enough good things about it.


The Westin's lobby is actually separated on two separate floors.  The bottom level is for bag checks and a good meeting point for large parties.  Late at night, security checks hotel keys to ensure only guests are permitted in the main lobby, a nice feature.  The first floor also had a mock tennis court painted on the ground, a nice tip of the cap to the U.S. Open which was happening at the time of my stay.


The second floor lobby contains the check in area and the hotel's second restaurant, Bar 10.  Though sometimes crowded, the space never felt noisy and featured plenty of comfortable chairs.


Due to my Starwood Preferred Guest Gold status, I was assigned a room on the Starwood Preferred Guest floor.  Before anyone gets too excited, most Sheraton and Westin properties have a Starwood floor, but I've never noticed a difference in room size or quality.  The floor is usually one of the highest ones that provides (slightly) better views and quieter surroundings.


My room was large by New York standards, and featured a Westin Heavenly King bed along with a desk for catching up on work.  I have to hand it to Westin, I sleep more soundly on their mattresses than I do on mine at home!  If they ever run another big sale on beds, you can be sure I'm buying.

I should probably note here that my Gold status also got me free Wi-Fi.  I found the internet speed to be blazing fast, an unusual rarity in hotels today.  I was able to get plenty of work done at my desk during the trip, something I didn't even anticipate.

The bathroom was small but functional, and featured the standard white tea amenities from Westin.  The shower had dual heads, meaning water pressure was absolutely not an issue.  One drawback, though, was the black tile on the floor and walls.  It really showed some dirt and water splashes, so it had a rather grimy look, even when I first entered the room.  I suppose you could chalk that up to being a well-traveled New York hotel.

As I mentioned before, the Starwood Preferred Guest floor is one of the highest in the hotel.  My room had a really great view to the north of both Times Square and the larger buildings in Manhattan. 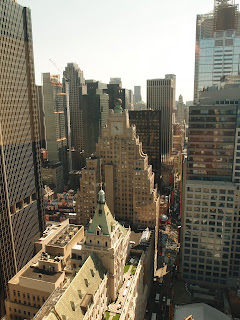 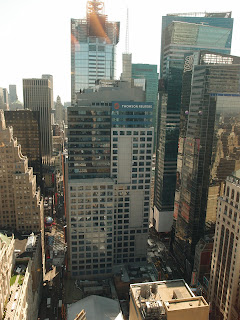 Overall, my stay at the Westin Times Square was extremely pleasant.  All the staff I interacted with showed a friendly demeanor, and my room was perfectly suitable, especially by New York standards.  I enjoy being slightly removed from the Times Square tourist mayhem as well.

Though I have another trip planned to New York in December, hopefully I will be able to review another property for you guys.  Otherwise, it might be back to the comfortable Westin!