With Restaurant Week in full gear in Baltimore, Ms. CCT & I decided to use our limited evening time to try one of the many participating restaurants featured on the list.  For the uninitiated, some establishments offer a pre-fixe menu (with a choice for appetizer, entree, and dessert) all for about $30.  This is a great way for a couple to hit up several restaurants that they would otherwise not be able to afford.  However, you have to be careful and choose wisely.  A lot of spots offer very limited selections (think two entree choices) or price their menu so the selections don't even add up to $30!

Luckily, after narrowing our picks down to a select three spots, Ms. CCT & I opted for Alchemy in Hampden.  We have had some hit or miss meals in Hampden, from exotic kangaroo steaks at the Corner BYOB to really touristy, bland diner food at Cafe Hon.  Breath easy, as Alchemy really hit home for both of us. 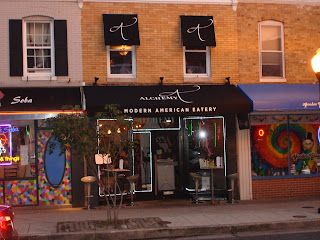 Located adjacent to the massive Royal Farms and near several other quality restaurants, Alchemy had an air of quality, casual dining.  It was even more relaxing to see the chef roaming between tables, questioning individual diners about the quality of their selections.  After a short wait, we were seated near two other couples, one clearly being on their first date.

As you can see from the appetizers, we felt a bit taken aback.  There were so many solid choices that we knew their would be some serious food envy with whatever we decided to go with.  Being ever the greedy couple, we elected for the crab mac n' cheese, mojito mussels, and French onion soup.


The mac n' cheese had a great crust, but the inside left a little to be desired.  The huge clumps of crab were a plus, yet it lacked any real "kick" from the mild white cheese they used.  What really enhanced the dish were the roasted heirloom tomatoes tucked inside.  They added a desperately needed jolt of flavor and were the best part.

Ms. CCT enjoyed her soup, which came out at a near boiling temperature.  After patiently waiting several minutes for it to cool down, she got to enjoy the goey mess that French Onion soup always devolves into.

We paced ourselves well and saved plenty of room for the mussels and complimentary house bread.  The mussels were high quality, but with all of the different flavors featured on the menu description, it really didn't seem like many of them showed up in the dish.  I tasted mild hints of basil and mint, but other alleged ingredients (such as blood oranges) seemed to be missing in action.  Oh well, I don't regret the choice at all.

When our ever-attentive waitress brought out the menu for entrees, I agonized back and forth over several choices.  The red snapper looked great, but so did the spicy pork tenderloin.  After back and forths, some heated debate, and even a coin flip (ok, not all of that happened), I settled on the snapper....only to immediately flag down our waitress and elect for the beef medallions.  The server was completely understanding and nodded in way that made me feel like I made the right choice.

I think our eyes became the size of dinner plates (pun kind of intended) when the entrees arrived.  My meal showed a lot of promise, and Ms. CCT's was interesting as well.


I'm not a fancy food snob, but I appreciate cool plating whenever it isn't the focal point of the meal.  Luckily, as you can see, the real standout part of the dish was the GIANT lumps of crab meat.  They were certainly great, but the crab surprisingly paled in comparison to the tender and juicy cut of meat.  Interestingly enough, the waitress never asked how I wanted my beef prepared and it totally slipped my mind as well.  The medallions were somewhere between medium rare and medium, but it was expertly done.  I can honestly say it was a top 20 cut of beef in all my time here in Baltimore.

Let's not leave out Ms. CCT.  She had the tall task of completing a massive portion of red snapper with a garlic and tomato salsa as well as refried bean side (on the left) with dollops of jalapeno creme.  The meal was very interesting, and she truly enjoyed it save the beans which were left untouched.  Of course, the slab of fish was so big imposing that she ate the rest for lunch the next day!

Stay tuned for the next installment featuring Dessert and Final Thoughts Recap!